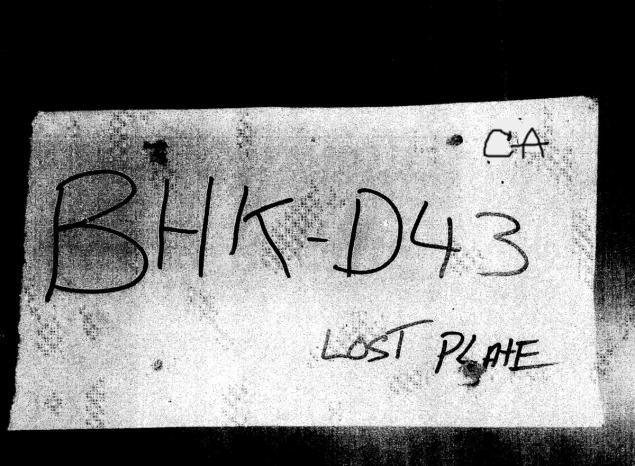 In this article, Los Angeles DUI Defense Lawyer discusses PAPER LICENSE PLATES: REASON FOR A POLICE STOP.  Click on the links below to go directly to your topic of interest.

If you are stopped because your car had paper license plates, Los Angeles DUI lawyer can help you fight your case.

Most defendants arrested for a DUI in Los Angeles get arrested by one of four ways.

(1) Through an officer observing a Vehicle Code violation and pulling over a driver to issue a citation or to give a warning;

(2) through a DUI checkpoint investigation;

(3) through a “welfare check” approach by a police officer on a side of the road;

(4) through an automobile collision investigation.

IS HAVING PAPER LICENSE PLATE A VIOLATION OF THE LAW?

1. In People v. Hernandez, 146 Cal.App.4th 773. (3rd Dist., 2006) defendant’s conviction was reversed after the court of Appeal agreed with the defendant that the traffic stop was unlawful.  Hernandez was arrested after a Deputy Sheriff pulled over Hernandez’s truck after observing no license plates but only a “temporary operating permit” attached to the rear window.  The basis for the officer to stop a car was officer’s opinion that temporary operating permits are “very often” forget.  Traffic stops are treated as investigatory detentions for which the officer must point to specific and articulable facts justifying the suspicion that a crime (a violation) was committed.  When an officer has an articulable and reasonable suspicion that an automobile is not registered, or that either the vehicle or an occupant is subject to seizure for violation of law, he may detain the driver to check his or her driver’s license and the vehicle’s registration (Pennsylvania v. Mimms (1977) 434 U.S. 106, 109).  Here, the court determined that the stop was illegal because permitting an officer to pull over a vehicle with a temporary operating permit only because they are “very often” forged, would be tantamount to ruling that “it is always reasonable to suspect that a temporary operating permit was invalid”.

2. In In re Raymond C., 145 Cal. App. 4th 1320 (4/3th Dist., 2006) a juvenile court found true an allegation that minor drove a vehicle under influence of alcohol in violation of California Vehicle Code sections 23152(a) and 23152(b).   There, in contrast with Hernandez,  a Fullerton police officer observed no rear license plate and no temporary operating permit attached to the rear window.  The minor’s car had a temporary tag attached to the front of the vehicle.  The officer did not see the front window temporary tag prior to pulling over the vehicle.  Had the officer observed the valid temporary tag prior to conversing with the driver, the stop could be illegal (U.S v. McSwain (10th Cir. 1994) 29 F. 3d 558, 561).  But, the officer conversed with the driver first and observed objective signs of intoxication permitting him to conduct further investigation. Also of note is a lack of dealer’s plates that father of Raymond C removed – a clue to the officer that the car could be stolen.

3. In U.S. v. McSwain 29 F.3d 558 (10th Cir. 1994), McSwain had no license plates on his car, but a temporary registration tag attached to car’s window.  After confirming the registration was valid, a police officer conversed with the defendants and learned that his driver’s license was suspended. In reversing the denial of the motion to suppress the court stated “…Once Trooper … approached the vehicle on foot and observed that the temporary sticker was valid and had not expired, the purpose of the stop was satisfied. Trooper’s further detention of the vehicle to question Mr. McSwain about his vehicle and travel itinerary and to request his license and registration exceeded the scope of the stop’s underlying justification.”

4. Similarly, in U.S. v. Wilson. 205 F.3d 720 (4th Cir. 2000) the defendant was stopped for not having permanent license plates on a vehicle he had recently purchased though his vehicle was validly displaying temporary paper license plates on the car. Their expiration date and the car’s make and vehicle identification number were handwritten on the bottom of the tag. The officer, though he never saw anything illegal about the tag or the operation of the car, stopped Wilson because he was unable to read the expiration date on the tag. An illegal firearm was discovered and Wilson was arrested. In overturning the denial of the motion to suppress, the Court stated: “An objective assessment of the facts and circumstances of this stop compels the conclusion that the officer lacked any articulable, reasonable suspicion that a violation had occurred. Simply put, he saw nothing wrong, and he suspected nothing. Upholding a stop on these facts would permit the police to make a random, suspicionless stop of any car with a temporary tag. The Fourth Amendment does not afford the police such unbridled discretion”

HOW DO YOU AVOID BEING STOPPED IF YOU DRIVE WITH PAPER LICENSE PLATES?

Whether or not the stop is legal and you are arrested for drunk driving in Los Angeles will depend on what the police officer will write in his police report.  Based on the four cases cited above a Los Angeles driver can protect himself against a police stop by complying with case law.  Although permissible under the law to attach the temporary operating permit to the front window, a driver must attempt to attach it to the rear window to avoid being pulled over.  Second, do not remove paper license plates or the dealer plates because it shows that the car was just purchased.  Thirdly, if you are stopped in Los Angeles for a traffic stop, try talking as little as possible with the police officer to limit police investigation.  Police Officer’s purpose is to investigate crimes – be mindful of it and do not volunteer information that can lead to Los Angeles DUI arrest or investigation.

Although permissible under the law to attach the temporary operating permit to the front window, a driver must attempt to attach it to the rear window to avoid being pulled over. Second, do not remove paper license plates or the dealer plates because it shows that the car was just purchased.

Second, do not remove paper license plates or the dealer plates because it shows that the car was just purchased.

Thirdly, if you are stopped in Los Angeles for a traffic stop, try talking as little as possible with the police officer to limit police investigation.  Police Officer’s purpose is to investigate crimes – be mindful of it and do not volunteer information that can lead to Los Angeles DUI arrest or investigation.

Police Officer’s purpose is to investigate crimes – be mindful of it and do not volunteer information that can lead to Los Angeles DUI arrest or investigation.

Under the new law singed by the Governor last year (AB 516), starting from January 1, 2019, California car dealers will have to put new license plates on a newly bought vehicle before it is delivered to a purchaser. They will also have to report to the Department of Motor Vehicles (DMV) each transaction via innovative dealer reporting electronic system.
The main reason for the new law was the problem law enforcement faced using current paper license plates. The current license plate are hard to track, however, these new temporary license plates allow police to easily verify vehicle information while the vehicles are driving on the roads.
Currently, if you buy a new or used car you pay fees to the dealer and leave the car dealership with a notice of sale attached to the corner of the windshield without any visible identification of the driver on it. The piece of paper attached to the windshield is commonly called a “paper plate”. It’s virtually impossible from the distance to read or scan the information from the “paper plate”. Thus, motorists can sometimes avoid paying tolls at the toll roads by running the booth and taking paid roads or express lanes for free. In addition, paper plates will not be detected at some red light enforcement cameras or other cameras used for traffic and parking enforcement. It’s also makes very difficult for the police to identify hit-and-run drivers or those drivers who are caught on the camera but flee the scene of the crime. The final design of the temporary plate is still under development, but what is definite is that it will show unique number of sale and expiration date, visible and clearly identified by the police and traffic cameras.
This new law will modernize identification system of vehicles and will help the police to find the person behind the wheel of the car as well as track his or her car. The authorities hope these new law will help them to solve crimes, improve public safety and supply the State budget with more than $15 million in revenues per year.

HOW LONG CAN YOU DRIVE WITH DEALER PLATES ACCORDING TO CURRENT CALIFORNIA LAW?

Californian allows drivers to drive with the dealer plate (paper plate) for 90 days beginning from the sale date.
The law does not require for the dealers to make sure that buyers receive the permanent license plates and registration within 90-day period. Also, if a dealer fails to submit the purchaser’s information to the DMV in time, goes out of business, or enters wrong information in the system, the driver will continue to drive on the dealer plates until he contacts the DMV himself. A motorist who is driving with paper plates can be pulled over and get a ticket, or worth yet, being investigated for a DUI or another crime. In our experience, any police contact is always potentially problematic and dangerous and is rarely pleasant.

Under the law, after the purchase transaction is completed with the dealer, the dealer must register the vehicle, making it completely his responsibility. Here is the steps in the procedure:

1. Upon purchase, the car dealer must report the sale of new or used vehicle to the DMV via specially designed electronic reporting system. The system will assign a unique number of sale to each transaction which will be displayed (1) in report-of-sale form and (2) on the temporary plate. This unique number will identify the car and it will be large enough to be seen from distance by police and traffic cameras. The electronic reporting system will also allow the police to check some vehicle characteristics and some personal data about the dealer and the buyer.
In the even of sale of a new car or other car that does not have any previous California license plates, the electronic reporting system will provide a temporary plate, which then must be attached to the vehicle.
2. The dealer must attach on a vehicle a copy of the sale form and/or temporary license plates before the car is allowed to leave the dealership. Only after this new license plate is attached, the buyer is allowed to drive the car of the parking lot.

3. The dealer must submit all the necessary paperwork to the DMV for the registration of the vehicle within 30 days (for a used vehicle) or within 20 days (for a new vehicle) from the day of the transaction. This includes fees collected from the purchaser and the actual application with the date of the transaction, unique number of sale, buyer’s and dealer’s names, addresses, signatures, etc.
4. The buyer will receive the permanent license plates and the registration card from the DMV via mail or within 90-day period.

If the dealer fails to register the vehicle, HE, and not the purchaser, will face penalties from the state.

THE COST OF REGISTRATION TO GET TEMPORARY LICENSE

Upon the sale of the vehicle, the dealer will typically charge the buyer several fees including the fees to prepare and to process the necessary papers, the fee to get to get the temporary license. With the passage of new law, it will probably cost more to get the license plates and to process sale of vehicle with the state. We expect the document fee and other miniscule fee to increase upon passage of new law.

8 responses to “PAPER LICENSE PLATES: REASON FOR A POLICE STOP”