Home > Blog > What is Legal Blood Alcohol Level for DUI in California?

What is Legal Blood Alcohol Level for DUI in California? 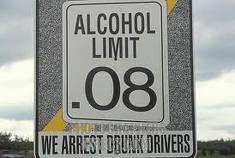 This article gives an answer to the question What is Legal Blood Alcohol Level for DUI in California?  Click on the links below to go directly to your topic of interest.

This legal presumption is codified in the statute and can be found in California Vehicle Code section 23152(b).

The presumptions are very damaging to California drivers and the only one that truly matters is the presumption that an alcohol level at the time of driving is above .08% if the driver is tested within three hours of driving and tests above the legal blood alcohol level.  This presumption, just like the other presumptions, is rebuttable and can be overcome with a good defense evidence and argument.  For example, the scientific approach used in Los Angeles DUI defense can easily overcome the presumption and show that the presumption is a legislative excuse to make prosecutor’s job easier so that they can get convictions faster.  However, there is no basis in science to justify a conclusion that a person who is above the legal blood alcohol level must be above .08% three hours earlier.

If a driver operates a commercial vehicle, the legal alcohol level is reduced to .04% by weight of alcohol in blood and another rebuttable presumption operates to presume that the person was above the legal limit if within three hours of driving he was above .04% blood alcohol level.  The appropriate code section that addresses DUI while driving a commercial vehicle is California Vehicle Code section 23152(d).

In September of 2016 the California Legislature passed the law equating drivers for hire to drivers who operate commercial vehicles.  Uber, Lyft, and Taxi drivers will be subject to this law and can be found guilty of a DUI when their blood alcohol level is .04% or above.  This is a significant change from the previous law that allowed an Uber (and other drivers for hire) driver to be at an alcohol level of .07% or less alcohol while transporting a passenger.  This new law will take effect on July 1 0f 2018 and is  codified in California Vehicle Code section 23152 (e) and 23153(e) as amended.

A person who is under 21 years of age can be cited or arrested for a “Minor DUI” or “Underage DUI”, which is defined as .05% DUI. Also, a minor can be cited for .01% DUI under zero tolerance law.

For clarification, “underage DUI” is a DUI that only a minor can be charged with because of the blood alcohol level for “underage DUI” at least .05%.  This offense is an infraction but requires a class before the license can be reissued and also will result in one-year suspension. A minor can still be accused of a regular DUI when his or her blood alcohol level is above .08% with much harsher consequences.

The distinctions between 0.01% DUI and 0.05% DUI (the two different minor alcohol related violations) involve the level of the offense. A .01 BAC offense is a civil offense where as .05 BAC offense is an infraction. A conviction of .05 BAC minor DUI requires an alcohol education class where as .01 BAC does not. The major similarity between these two offenses is the consequences on driver’s license. A minor cited under either of the code sections will face a license revocation for 1 year by the DMV. A minor will be entitled to a hearing that you can request only within 10 days of the arrest. Please call an attorney as soon as you get arrested so that we can contact the DMV on your behalf.

Can a non minor be arrested for a DUI in Los Angeles with a blood alcohol level less than .08%?

Run Down: Yes you can. It is relatively common to be prosecuted for Driving Under the Influence when the Blood Alcohol Level Concentration (BAC) is less then .08%. Four things come to mind that can influence such a prosecution:

When the blood alcohol level is between those two values and equal to .05%, .06% or .07 % of alcohol, there is no presumption either way, but, the BAC and other facts can be considered in deciding if a person was intoxicated. So, if a defendant tested .06%, but was involved in a car accident or tested positive for some other substance such as marijuana, he is very likely to be arrested and prosecuted for a DUI almost anywhere. On the other hand, a .05% BAC with no accident or bad driving is very unlikely to be prosecuted for a DUI.