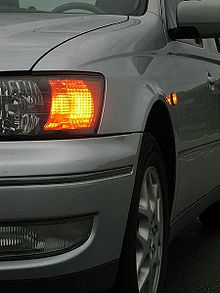 This article discusses  California Vehicle Code 22107: Unsafe Lane Сhange. Click on the links below to go directly to your topic of interest.

CVC 22107. No person shall turn a vehicle from a direct course or move right or left upon a roadway until such movement can be made with reasonable safety and then only after the giving of an appropriate signal in the manner provided in this chapter in the event any other vehicle may be affected by the movement.

Under CVC 22107, a vehicle can not turn right or left unless it is safe and unless a signal is given before a turn.  In other words, this law requires using blinkers before a car can turn or change lanes.  When the car does not have blinkers, a hand signal must be given to let other people know that you are planning to make a turn.

When a driver does not use the blinker or a hand signal before turning or changing lanes, he can be stopped by the police. A traffic stop is probably the most common way the police will come in contact with a driver and any stop can lead to a DUI investigation.  California VC 22107 is a very common violation that is given as a reason for lots and lots of DUI investigations.  Making sure you use a blinker is very important if you want to avoid being stopped by the Los Angeles police, CHP, or other police agencies in Los Angeles.  If you are looking for a DUI attorney in Los Angeles, call our office to schedule a free consultation.  We specialize in defending DUI cases and use motions to attempt dismissal of Los Angeles DUI charges prior to a jury trial.  Only when the motions for dismissals are denied by judges and we are unable to get a good plea bargaining offer from the Los Angeles DUI prosecutors, Los Angeles DUI attorney will take your case to a jury trial.

What is the cost of a Vehicle Code 22107 violation in California?

A CVC 22107 is not an expensive ticket relatively speaking with fines running between $300 and $400 depending on the county. Often, the police will let you go with a mere warning when the reason for the stop is CVC 22107. If cited, this ticket is a moving violation that carries 1 point on the driving record and can be removed from the driving record with a traffic school. However, the police will use this code section to start a DUI investigation.

You should also consider hiring an attorney even if you are not arrested for a DUI. A traffic attorney can go to court for you and fight your ticket. If you are concerned with missing work, an attorney can appear instead of you in court and keep you informed of the results. Many times attorney can have the ticket dismissed.

If you are a truck driver, any ticket has to be fought in California because the DMV will not allow traffic school. Also, a one-point violation on the commercial driver’s license is counted as a 1.5 point towards negligent operator calculations. Negligent operator calculations are a way for a DMV to suspend driver’s licenses of drivers who get too many traffic violations. The violation count that will cause a suspension is 4 points in one year, 6 points in 2 years, and 8 points in 3 years.

A code section 22107 usually has to be read in conjunction with CVC 22108 which requires that the signal be given for 100 feet continuously before the turn.

How To Fight Unsafe Lane Сhange (CVC 22107) Violation in California?

Most reasons to fight a CVC 22107 violation have to do when police continue their investigation after they stop and arrest a driver for driving on a suspended license, driving without a license, a DUI, or some other criminal offense. One of the legal motions that Los Angeles criminal defense attorney can bring to trial court attention to get a dismissal of your Los Angeles DUI is based on a violation of the search and seizure clause in the 4th amendment to the U.S. Constitution.

In California, such a motion can be brought under Penal Code section 1538.5.  A search and seizure motion is litigated prior to trial and consists of an evidentiary hearing where the police officer has to explain to the judge the reason he stopped your car.  When such a motion is litigated, your Los Angeles DWI attorney will argue that the traffic stop was illegal and the police violated your rights.  If granted, the judge will suppress evidence of drinking, making the prosecutor’s job impossible and causing eventual dismissal of the DUI because the prosecutor will not be able to proceed to trial.

A police stop based on a violation of Vehicle Code 22107 can be often successfully fought because you do not have to use a blinker when your turn will not affect another person.  In People v. Carmona, the police vehicle was heading towards Mr. Carmona when he turned his vehicle without using the blinker.  The court of Appeals decided that this is not a violation of CVC 22107 and that the police stop was illegal because the turn did not affect other persons.  For example, if at the time of the turn the road is empty, using blinkers is not required.  A stop in such a scenario is illegal.

People v. Dibble clarifies that the signal is primarily aimed at vehicles traveling behind the car marking the lane change. Also, not the actual effect but only the potential effect matters.

If you were stopped by the police because you did not use a blinker, the stop of the vehicle could have been illegal and can be dismissed! Call (818)921-7744 to our office to talk to a DUI attorney about your case!