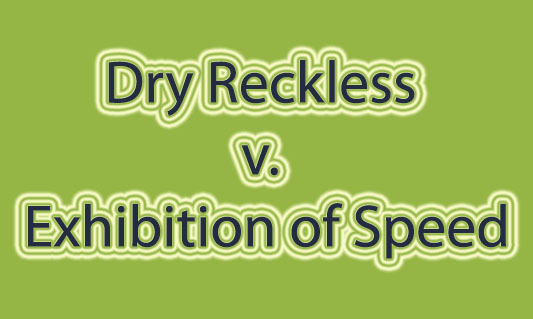 Dry reckless , codified in the California Vehicle Code Section 23103, in an alternative to a DUI plea that is can be used during a plea negotiation by the Los Angeles DUI Attorneys.  A “dry reckless” is a great alternative to a DUI mainly because it is not a “priorable” offense so that, unlike a “wet reckless”, it has no statutory provisions to enhance punishment for a future DUI.  Also, there is no requirement to complete an alcohol education program that is often required in a ‘wet reckless” and is mandatory for any DUI convictions.  Lastly, just like with a “wet reckless”, a “dry reckless” carries lesser fines, lesser probationary period, lesser jail exposure, and no license suspension.

How  Dry Reckless and Exhibition of speed are different?

Although rarely enforced by the Los Angeles Superior Court, both a “dry reckless” and a “wet reckless” have a 5 days statutory minimum jail sentences (VC 23013(c)).  In contrast, an “exhibition of speed” does not have a statutory minimal imprisonment, making it a better plea.

Another subtle difference is rarely talked by others, but encountered recently by me in court.  Because dry reckless looks very similar to a wet reckless on the rap sheet, there is a small chance that the prosecutor will misread it and count a dry reckless as a prior for a subsequent DUI prosecution.  However small the chance of misreading the prior with a dry reckless, there is no chance to misread the rap sheet with the exhibition of speed because it is a completely different code section.

Here is a real life example: a defendant mistakenly was charged with a 3rd offense DUI while he was on probation for a wet reckless and had a prior dry reckless conviction.  The prosecutor made a mistake charging a 3rd offense DUI because the clerk at the dry reckless prosecution made an error in the minute order.  While it would be easy to fix the error, the defendant was in custody and did not want to wait sitting in jail while the court fixes it.  The overzealous prosecutor also fought hard to defend a high jail time offer even when the reason for it disappeared, namely, Los Angeles DUI Attorneys proved that the prior was a dry reckless.  Eventually, the defendant was sentenced to “time served” and avoided a significant jail sentence; but, all the problems would have been avoided if the defendant pleaded to an exhibition of speed instead of a dry reckless in his prior case.

Los Angeles DUI Attorneys are experts in negotiating a dry reckless or an exhibition of speed pleas as alternatives to a DUI.  Call us now to schedule a free consultation.