Home > Blog > Driving on a Suspended License in California

Driving on a Suspended License in California 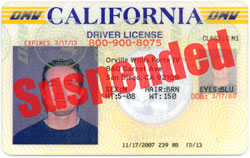 In this article Los Angeles DUI Defense Lawyer discusses Driving on a Suspended License.  Click on the links below to go directly to your topic of interest.

California Laws covering driving on a Suspended License can be found in California Vehicle Code sections 14601-14601.5.  The decision to charge one code section over another primarily deals with the type of suspension or revocation.  For instance, if the driver’s license suspension is based on a conviction for drunk driving in Los Angeles, the prosecuting agency is likely to file a criminal complaint for a violation of California Vehicle Code section 14601.2.  This particular code section carries mandatory jail time (at least 10 days for 1stviolation) and severe driving license consequences that involve mandatory ignition interlock devise (IID).  In contrast, other code sections do not carry mandatory jail time and reserved for driving license suspension based on losing administrative per se hearing in Los Angeles (CVC 14601.5) or suspension based on failure to appear on infraction (CVC 14601.1) or sometimes even non-payment of child support.

Some of the convictions for driving on a suspended license can have draconian consequences, including sever commercial driver’s license consequences, such as possible loss of commercial driver’s license for life.  It is extremely important to seek quality Los Angeles suspended license attorney to help defend against these possibly life changing accusations.

If your driving privilege has been suspended or revoked, it is against the law drive a vehicle, anywhere in the USA.  If you continue to drive a vehicle while your license suspended, you can get face jail time, fines, loss of vehicle through forfeiture laws among other punishments.  Rather then face punishment for driving on a suspended license, it is far better to see if you qualify for a restricted license that would permit driving to and from work or anywhere depending on the type of restriction.

In California, the most serious punishment for driving on a suspended license is reserved for suspension based on drunk driving conviction.  In Los Angeles suspended licenses after a drunk driving conviction can result in serious jail sentences.  Many police agencies in Los Angeles county have units specializing in arrest in prosecution of drivers who drive with a suspended license.  For example, Los Angeles police department has a Habitual Traffic Offender Unit that is known to do undercover surveillance of defendants and often will follow drivers who were informed in court that their license is suspended and observe these drivers drive from the courthouse.

A driver can have a suspended license for a number of reasons.  The worst kind is a suspension that happened because of a DUI.  When a person receives a DUI, the clerk of the court will notify the DMV electronically that there is a DUI and the DMV will suspend or revoke the driver’s license.  If you drive on a suspended license after a DUI, you can be charged with a California Vehicle Code section 14601.2.  A California Vehicle Code 14601.2 conviction carries mandatory jail time and other consequences that are a lot more severe then other suspended license convictions.

Here is the list of possible reasons for suspension of driver’s license:

1) Driving Under the Influence

2) Failure to appear in court

DRIVING ON A SUSPENDED LICENSE ALSO CARRIES POINTS WITH THE DMV

The Department of Motor Vehicles counts number of points on the driving record.  The point count is important for insurance and for determination of negligent operator status of a driver.  If a driver gets more then 4 points in one year, his license might be suspended.  The point counts is covered under “negligent operator” statutes and allow 3 points in 1 years, 5 points in 2 years and 7 points in 3 years without suspension.  Many offenses do not carry points and Los Angeles DUI attorney negotiated many dispositions that include dismissal of driving on a suspended license and avoidance of points.

Because driving on a suspended license is a misdemeanor crime, in California, you are entitled to a trial by jury.  At trial, the burden is on the prosecutor to prove that you were driving on the suspended license and that you knew that your license was suspended.  The jury instruction used to prosecute driving on a suspended license can be found in Calcrim 2220.  If you did not know that your license was suspended, you have a defense to the charge.  You can call our office anytime to talk to Los Angeles DUI attorney.  Our attorney specialize in driving related offenses and can help you defend against this or other related charges.  Call our office anytime to talk to a Los Angeles suspended license lawyer.  We will provide free consultation over the telephone on in person.  We are confident that we can help you defend your case and get back your driver’s license.  We provide quality representation at affordable price. 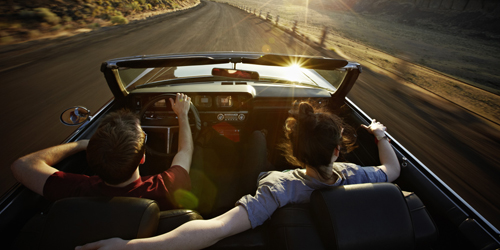 You appear before a judge because of an arrest for driving on a suspended license. The prosecutor will attempt to prove a conviction by having a police office identify you as the person who drove the vehicle on the date in question and by proving using certified Department of Motor Vehicle record that your license was suspended or revoked.

California jury instructions lists 2 elements that the jury must prove

(2) when the defendant drove he know that his or her driver’s license was suspended.

Most defenses focus on either denying that the police observed driving or denying knowledge of the conviction.

Prosecutors are often allowed to use a rebuttable presumption that if it is proven that California Department of Motor Vehicles mailed a notice to the defendant telling him or her that his or her driver’s license was suspended or revoked and the license was mailed to the most recent address reported to the department, and the notice was not returned to the department as undeliverable or unclaimed, then the jury may but is not required to, conclude that the defendant knew his driver’s license was suspended or revoked.  This jury instruction presumption is designed to undermine a defense that defendant did not know about the license suspension.  Thus lost mail can often have extremely prejudicial consequences and skilled Los Angeles criminal defense attorney to win at trial or convince Los Angles city prosecutor or Los Angeles County District Attorney that you in fact did not know that your driver’s license was suspended.

Punishment for a first time offender can be pretty severe and varies based on the reason for the suspension or revocation.  Some driving on the suspended or revoked license offenses do not carry mandatory minimal jail time while others carry at least 10 days of jail.  The maximum punishment for a first offense driving on a suspended license can also include up to 6 month in the county jail and a possible probation for 3 years.  A monitory fine can also range from $300 to $1000 for a first time offender.  Repeat offenders face increased jail time and fines from $500 to $2000.

Not only attorney is necessary when defendant is attempting to prove to the prosecutor or the court an existence of defense or dispute a fact, but also, attorney can be an effective advocate because he is able to present mitigating factors in most eloquent manner.  Attorneys in our office know many judges and prosecutors in LA county and able to establish rapport based on years of working together.  Such personal touch and rapport with judges and prosecutor can help negotiate a favorable disposition or a dismissal for your driving on a suspended license case in Los Angeles.

You decided against the given advice and choose to represent yourself.  You watch The Good WIFE or some other law drama. You walk into the courtroom with confidence, sharply dressed and prepared to state your case. The prosecutor has no reason to negotiate with you, and even might not want to discuss your case with you. The prosecutors are often rated on the number of convictions they have and might not views you as an easy win, because he marks his success by how many wins he racks up. Your case ends quickly and he has an easy day.

One response to “Driving on a Suspended License in California”