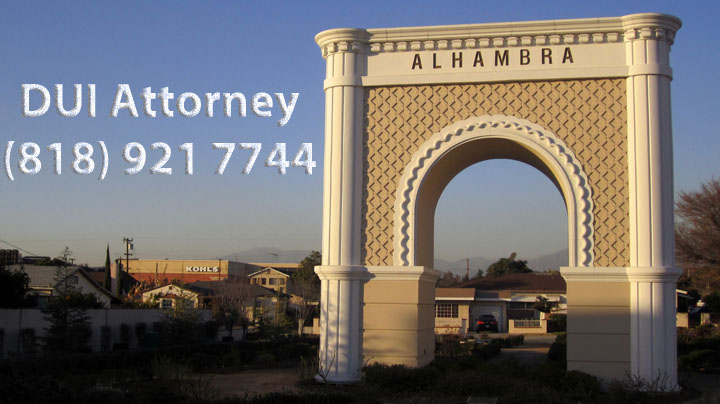 A DUI is a very common offense in California.  DUI driver arrest and prosecution is federally funded and supported by various anti-DUI organizations, such as MADD.  The consequences of such, often victimless crime, are severe.  A person arrested for a DUI can be jailed, lose his driver’s license, pay fines, lose his job and have tremendous increase in his insurance rate for ten years.  In Los Angeles, DUI are prosecuted by Los Angeles County District Attorney or by a City attorney. Alhambra DUI Attorney will help you defend your DUI in court and at the DMV.
Alhambra is a city in San Gabriel Valley that is part of Los Angeles County.  Alhambra became a city in 1903 and thus is considered one of the oldest cities in the Los Angeles county that has a full police force and a city governance.

The city of Alhambra does not prosecute its crimes, instead all offenses, including Alhambra DUI cases, are prosecuted by the District Attorney Office of Los Angeles County.  This is a very typical arrangement, where the county prosecutor is in charge on the crime prosecution just like they did prior to Alhambra becoming a city.  The police force has 85 sworn police officers, 80 full time and part-time civilians, 9 reserve police officers and makes approximately 2,000 arrest each year.  The district attorney office is located on the first floor of the Alhambra courthouse.  Alhambra DUI is investigated by the local police agencies, such as the South Pasadena Police Department, and by the statewide police, also known as, the California Highway Patrol.

California highway patrol is in charge of enforcing law on the state’s highway.  A California Highway patrol is a state police agency that is very skilled in DU prosecution and will often come to take over DUI investigation that is started by another police agency.  The local CHP office that charged with apprehension of DUI drivers is located at:

When a DUI is filed in Alhambra, Los Angeles DUI lawyer may appear without you in court if your case is a misdemeanor.  For felony prosecutions, defendants have to personally appear in court.  Call Los Angeles DUI attorney for immediate assistance.  We can start working on your case right away.

If you are arrested for a .08% BAC DUI or higher, or for a refusal DUI, you are likely to face a DMV prosecution.  A DMV prosecution is a separate process that involves a evendentiary hearing in one of DMV driver safety offices.  During the DMV hearing you have a right to be represented by an attorney.  Alhambra DUI attorney is very experienced in DMV and DUI defense and will represent you at both.  During a DMV, hearing, which is called a “refusal hearing” or an “APS” hearing, you can expect the DMV to show that based on the evidence your license needs to be taken away for a period of time.  The DMV hearings can be won, but you need the help of an experienced DUI attorney to accomplish that.

The first step in helping yourself is to call Alhambra DUI attorney directly  You can talk to an attorney who will give you a free consultation about your case.  You might have a defense in your Alhambra DUI case.  For example, recently Los Angeles DUI attorney were able to get a DUI in Alhambra dismissed in exchange for a plea to a reduced charge.

The only way to know for sure if you have a defense in your Alhambra DUI is to call Los Angeles Defense Attorney and talk about the facts of your case.  We are waiting for your call any day of the week during most hours of the day.